Welcome to the Personal and Professional page for Don Windrem.

Our trip through South Dakota's Black Hills, Mount Rushmore, Yellowstone and Grand Teton National parks has been one of my most cherished trips. These places represent some of the best that the United States has to offer and is a trip I recommend to everyone. All of the states that we travelled through for this trip are Colorado, Nebraska, South Dakota, Wyoming, Montana, Idaho and Utah. We flew into Denver, Colorado and drove for a day up through Nebraska. If you have no desire to see the Oregon trail or quirky thing like Carhenge, I would recommend flying into Rapid City, South Dakota. We loved Nebraska but it is a lot of driving.

Also while in Nebraska, we stopped at Chimney Rock National Historic Site and Scotts Bluff National Monument Both were interesting but CarHenge, for its quirkiness and

South Dakota and the Black Hills were amazing with the Mount Rushmore and Crazy Horse monuments being so close. When traveling to Mount Rushmore, make sure you make a stop to the Artist's Studio where Gutzon Borglum, the artist behind the monument left documents, scale models and renderings of his vision for the full monument which was never finished. Then the Needles highway with its pigtails and narrow one lane tunnels through stone and weaving and curving through the forests of South Dakota.  Below are pictures of Mount Rushmore from behind the entrance, The Chapel in the Hills near Rapid City which was a full scale recreation of a Scandanavian craftsmen church, and then 2 photos of Needles Highway. 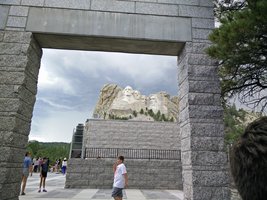 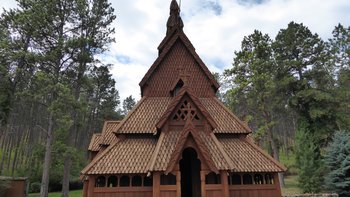 We next spent some time in Cody Wyoming and saw the rodeo, Buffalo Bill Cody arms museum and the Damn named after him. Then on to Yellowstone National Park which was amazing. The Bison, the Bubbling, colorful lava pits, the geysers, the Bison, the scenic beauty, of artists point and the Grand Canyon of Yellowstone, Waterfalls, wild life around every turn and the Bison. There are 1000's of Bison located in many places throughout the park which made for great viewing and the occasional traffic jam. We then traveled south through Grand Teton National Park which was beautiful but I wish we had spent more than one day there. Next time we will designate at least 3 days to Teton although you could easily spend a week there. We finished up our trip with a stay in Salt Lake City where we visited Antelope Island and the Mormon Tabernacle before heading home. We documented our trip with many photos and a photo album available by clicking this link

Travelling to Europe to ski has always been a dream of mine. I travelled to Japan to ski the year before and had a wonderful time. The skiing in Japan was really good, the culture was very different and very interesting and the sights were amazing. I had much the same excitement leading up to my trip. We flew overnight into Zurich and arrived in the early morning. The bus trip to St. Moritz is normally 4 hours but since they just recently had 40 inches of snow in 3 days, the trip was more like 6.5 hours. The hotel was nice, but the village of St. Moritz and the mountains were beautiful.

On the left, is a view of the mountains from the top of the Corviglia peak at 3057m (10,030 ft). The first thing I noticed was that trees did not grow on these mountains like in the Rockies and Vermont in the US. There are 3 glaciers in this photo mostly to the right of the photo. The lake is Lake St. Moritz which when it freezes over, becomes a horse racing track. We did not see the horse races because we arrived too late on Sunday but every sunday morning in the winter they race horses on the lake. Supposedly, it is very popular and millions of Francs are wagered on the races every Sunday.  We walked the track and if you did not know, you would think you were just walking a snow covered path on land. The picture below right is the group I skied with all week. We all skied at about the same level and had a great time Apres as well. We skied Corviglia, Corvatsch and Diavolezza while in St Moritz with Diavolezza being the smallest but my favorite because it was wide open and very steep.

The next two pictures are the Gondolas in Corvatsch. The Gondolas held close to 200 people and were full all day but they ran constantly.  They were the only way besides the Funicular Train to get from the bottom of the mountain to the mid station of the mountain.  Corvatsch is the largest ski resort in St Moritz and with a peak of 3303 m (10,837 ft), it was the tallest as well. The trails in Corvatsch are mostly beginner and intermediate but are fun and because it was so large, we never skied the same slope more than once. Lunches all 5 days of skiing was on the mountain at a mid station cafes. We stayed at the Club Med in St. Moritz and the setup for eating lunch was fantastic.  The food was pretty good but not quite as interesting as the foods like the Ramen bars in Japan. The bottom 2 photos are of the Bell Tower of Kirche St. Karl Borromäus church and of the leaning tower of St Moritz which was built around the same time as the Pisa tower but leans slightly less. St Moritz is a beautiful village with a nice mix of affordable hotels and really really unaffordable hotels. Badrutt's Palace was one hotel we saw that allowed its guests to travel in style in their choice of stretched Rolls Royce or stretched luxury custom SUV with TVs.

We then spent 2 days in Zurich and saw beautiful ParadePlatz, which is the trolley hub of the city where 9 or 10 trolley lines converge into this big plaza.  Shopping on Bahnhofstrasse, the electric cable cars, and so much history. For more information on the wonderful city of Zurich, see the following Wikipedia article Here. To see many more pictures of my trip, follow this link  here